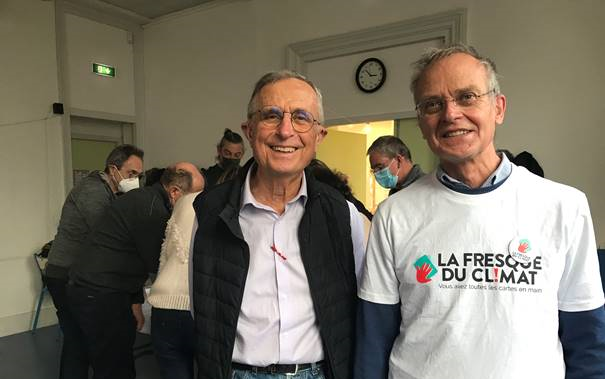 "I was looking for a way to explain climate change, and this game allows us to have friendly exchanges on these subjects, which are usually difficult to discuss calmly and objectively." This is how Noël Ozanne explains his involvement in the association The Climate Fresk.

At 78 years old, he is a very young "fresqueur": on Friday January 28th 2022, he hosted his third Fresk at the Université Inter-Âges du Dauphiné in Grenoble, named after this collaborative game that helps people understand the IPCC reports and the issues surrounding climate change through cause-and-effect links.

"Personally, adds Noël Ozanne, I am also angry at myself for not having seen sooner that our planet Earth had its limits." This former chemical engineer has spent his entire career in the mineral extraction industry: "bauxite, from which we make aluminium, or zircon, which we transform into zirconium, the metal that is used as a base for nuclear fuel cladding", he explains. And he adds: "in retirement, I had time to reflect, and I was no longer a prisoner of social pressures".

It was also in the early 2000s that his friend Olivier Bouilliez first became aware of the issue. A former electronics engineer, it was he who introduced Noël Ozanne to the Climate Fresk. He too led a workshop on January 28th 2022. In total, two tables of retired people were busy at the Université Inter-Âges du Dauphiné putting the 42 cards of this game in the right order, starting with a card called "human activity".

REDUCING ITS FOOTPRINT ON THE EARTH

For Olivier Bouilliez, it was a WWF report that triggered the idea. "It was a figure that struck me at the time", he explains, "the amount of land needed to feed a French person every year", before adding, "and when ecology takes hold of you, it's like a conversion!".

At 67 years old today, this Grenoble native also grows a few carrots and potatoes in his garden; he is especially pleased to produce Made in Grenoble honey with his four beehives.

"You realise that you feel better when you reduce your footprint on the Earth", says Olivier Bouilliez, to explain his commitment. "And then I have 3 children and 6 grandchildren", he adds, "and I would like them to have grandchildren themselves".