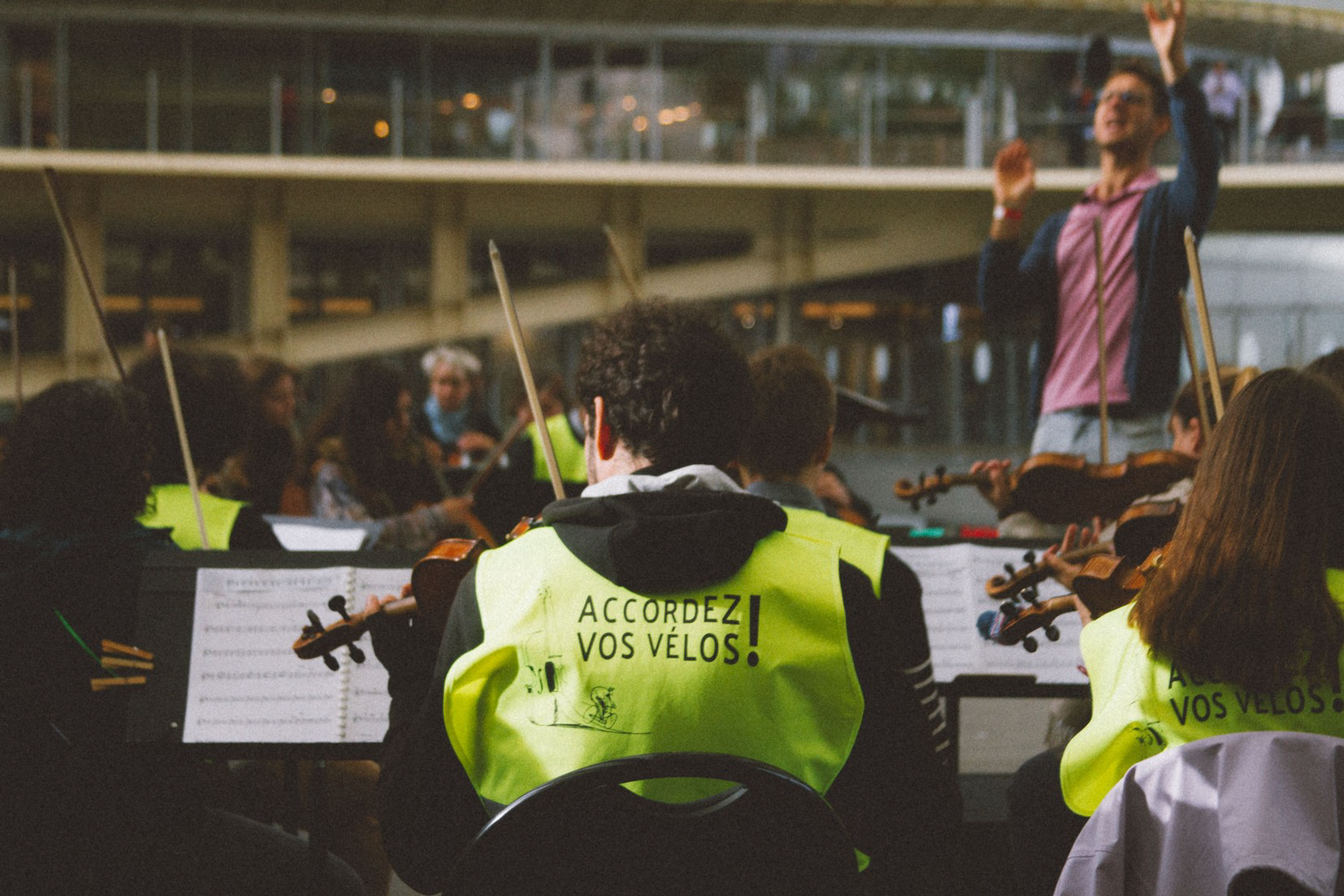 Musicians, conductor, instruments... all on bicycles! The Forces Majeures orchestra is getting ready to hit the road from 10 to 24 April, from Grenoble to Geneva. A "low-carbon" tour called "Accordez vos vélos !". On the programme: 250 kilometres by bike, and nearly 25 concerts in 20 stopover towns. The tour kicks off with a musical stroll through the streets of Grenoble, Green Capital of Europe, on Sunday 10 April.

In 2020, Les Forces Majeures adopted an environmental charter and definitively renounced the use of aeroplanes. Two years later, the orchestra founded by Raphaël Merlin (also cellist with the famous Quatuor Ébène) is taking another step forward with its first cross-border tour by bicycle!

The musicians and their conductor have already warmed up in a way last autumn during a first travelling festival: a day of concerts, from Paris to Saint-Denis, on 2 October 2021. From one performance to the next, 80 musicians travelled by bike, inviting the public to do the same. Robin Ducancel, director of the orchestra Les Forces Majeures, points out that "the transport of artists and audiences is one of the main causes of greenhouse gas emissions in the performing arts".

In Grenoble, 15 musicians will set off behind their conductor, Raphaël Merlin, equipped with electric bicycles and trailers to transport equipment and instruments (some specially designed for the double bass or the orchestra's timpani). Adding the technical team, a platoon of 30 people will be on the road! Until 24 April, in the Grésivaudan valley, on the Belledonne and Bauges balconies, on the Rumilly plateau and on the slopes of Mont Salève, they will be playing Mendelssohn, Honegger, Poulenc, Chabrier, Strauss and Yves Montand, "on bicycle".

Top departure on Sunday 10 April, with a first stroll through the streets of Grenoble, Green Capital of Europe 2022, starting from the MC2, Grenoble's Maison de la Culture.
From 11:30 am, brunch with the musicians is possible at the MC2 canteen. The Bicyclo Presto workshop will be present for any last-minute repairs. From 2.30 pm to 5 pm, a travelling concert, for an audience equipped with bicycles (and on registration). Starting from the MC2, the peloton will make several stops with music and stories. Information and booking on 04 76 00 79 00 or billetterie@mc2grenoble.fr

Tuesday 12 April at 8pm: concert by the Forces Majeures orchestra at the MC2 in Grenoble.
On the programme: Poulenc's Promenades, which set to music different types of travel (by bus, train, on foot or, of course, by bicycle); Vélocipède, an intoxicating polka by Josef Strauss; Mendelssohn's Symphony No. 4 "Italian", echoing the German composer's transalpine journey, among others.

An open rehearsal is scheduled for 6.30 pm. The musicians are offering the audience the chance to revise the lyrics of the songs A Bicyclette by Yves Montand and Blackbird by the Beatles, so that they can perform them together during the concert.

The Forces Majeures orchestra, which invites artists to rethink their tours through the prism of the environment, is indeed keen to create moments of sharing with the public. This is the meaning of the tour that will then take it to Geneva. The musicians will play at noon and in the evening in the towns they will pass through. They will be staying with local people, in gites or on campsites.

Wednesday 13 April: first day of the tour, on the way to Geneva.
Concert in Versoud at 2pm (on the esplanade of the town hall) and concert in La Combe de Lancey at 7.30pm (salle des fêtes Dupanloup).

Preview of the travelling festival organised on October 2nd 2021: